We’re still settling in, as you might imagine.  This week I unpacked another box.  I’ve decided I’m only going to unpack things now if I know exactly where they’re going to go once they come out of the box.  No point unpacking things just to pile them up somewhere and have to move them again.  If they’re in the box, they’re contained at least.

Over the summer I noticed that two of Thing 1’s shirts had holes.  The collar of his t-shirts was separating from the body of the shirt.  I finally got around to mending those this week. 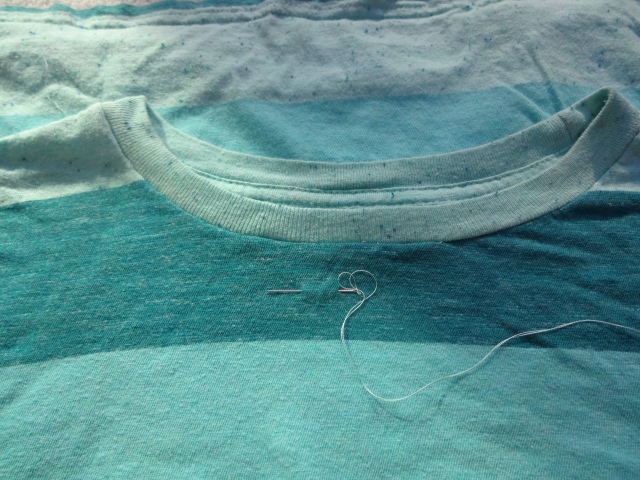 Nice huh?  I was really kind of surprised at how good it turned out.  Notice that spool of thread?  It’s from my grandmother’s stash.  I’m pretty sure the needle is a quilting sharp; I like them for small handsewing things.

Today repaired Thing 2’s jock for hockey (no pictures).  It has these velcro flaps that hold up the hockey socks that go over his shin guards.   One of the velcro sections had come loose from the shorts (they’re like this: http://www.hockeymonkey.com/bauer-hockey-mesh-jock-shorts-yth.html, not like a classic athletic supporter), so I got out the sewing machine and sewed that back down so it could go with us today.

I baked this week, too.  A very simple berry cobbler recipe I got off the giant bag of frozen berries from Costco.  It’s good as is (ideally warm, maybe with a hit of whipped cream), and I’ve been putting it on my oatmeal in the mornings.

This weekend Thing 2 and I are on the road again for hockey.  This time to Fort Bragg to take on the Fire Antz.  He’s a fun traveling companion – he’ll listen to audiobooks with me, or rock out to the 80s station on Pandora (I almost didn’t answer the phone when it rang as we were belting out the refrain from “Separate Ways” by Journey because we were so in the zone).    He’s pretty agreeable to meal options and he’s still excited about staying in a hotel.  With it just being the two of us, he gets a huge bed to himself 🙂

Okay.  I’m off to bed so that I am well rested for wild cheering tomorrow.  Wish us luck!

This entry was posted in Uncategorized. Bookmark the permalink.

Talk to me Cancel reply

This site uses Akismet to reduce spam. Learn how your comment data is processed.